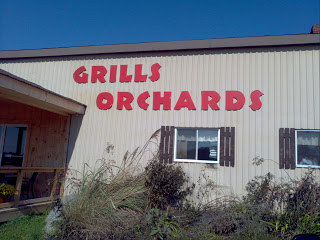 Diane and Randy McPherson of Grills Orchards in Belleville were the guest speakers at the Tweed and District Horticultural Society October meeting. They shared the changes that have taken place in the apple industry through the 14 years since they purchased Grill Orchards.

Many of the apple trees in the orchards are being replaced by dwarf apple trees to facilitate spraying (a very costly expense), pruning and picking.

A major change in the business occurred when National Grocers would not accept produce in their stores from local farmers. Since Grills Orchards delivered apples to several grocery stores in the Quinte area, they had to find another outlet for their apples. The result was the opening of a store at Grills Orchards as a way to support local farmers in the area. Locally grown apples, garlic, produce and even meat is sold at his store. The store now boasts a bakery that uses as many locally grown products as possible in the baking of breads and other baked goods. There is even a fudge counter for those with a sweet tooth!

At the conclusion of the meeting, many members had developed an awareness of the need to try and “buy local” in order to support the area’s farmers and economy. As President, Janet Kennedy always says many times throughout the monthly meetings “Buy Local”.

Members of the group had prepared several apple dishes to compliment this month’s topic. Members nibbled on a variety of apple treats…pie, cheesecake, muffins, “wedges”, loaves…..everything simply delicious! Some members were fortunate to win some apples from Grills during the monthly draw.

A local designer will share her secrets as she designs and creates a Christmas wreath.

The Annual General Meeting will take place with elections for several positions on the Executive.

Click here to see photos of the Tweed gardens.

Beautiful weather brought many local gardeners out in the early morning to pick from a selection of plants grown in members' gardens.

Trip to the Peterborough Garden Show

Some images from this summer's Mosaicanada 150 at Jacques Cartier Park in Gatineau, Quebec. The 32 huge floral structures were built with wire frames containing garden cloth, some irrigation and over 3 million plants.

Paving the Walkways at Moira Gardens

The Tweed Horticultural Society and the town of Tweed shared costs to pave the gravel walkways at Moira Gardens. Now it's an easier, more comfortable stroll around the Gardens. Check out the site just across from Tim Hortons. Buy a coffee, stroll across the street and relax in our beautiful garden.

A great resource for planting in pots courtesy of Garden Making Magazine, Niagara on the Lake, ON. Click on the photo.