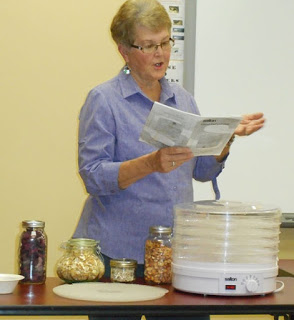 Local Tweed resident, Dorothy Hunt shared her dehydrating skills at the October meeting of the Tweed and District Horticultural Society. Since Dorothy has a HUGE garden, she traditionally used canning and freezing as a means to preserve her fruits and vegetables. However, as the garden grew and storage space became limited, Dorothy needed to find another means to preserve her crops. She turned to the  dehydrating process and according to Dorothy, “It is a lot of fun and I am always trying new foods!”

The internet offers a wealth of information about dehydrating. She also relies on the manual she received with her machine as a guide for the process. Her machine was purchased at Canadian Tire for about $60.00…worth every penny, according to Dorothy!

Dehydrating is the process of removing water and moisture from fruits, vegetables, herbs, bread and even meats. It is an economical way to preserve food when your garden has a great growing season. It inhibits the growth of bacteria. Food preparation is faster when using the dehydrated food for soups and stews.

Dorothy stated the importance of checking the trays in the machine frequently during the drying process. She has discovered that often the drying process takes longer that what the guide booklet recommends. It is important to dry meats, fruits and vegetables separately.

Dried food is great for hikers and campers as no refrigeration is required. The dried food can be used in soups, stews and casseroles or simply used as a snack like kale chips!

One great benefit of the dehydrating process is that it takes very little hydro making it a very economical.

November 1…Local natural craft enthusiast, Wanita DeVries will share her ideas to create Christmas decorative pieces using found and used previously items. The Annual General Meeting will also be held. The Financial Report for 2016 will be presented for approval.

Click here to see photos of the Tweed gardens.

Beautiful weather brought many local gardeners out in the early morning to pick from a selection of plants grown in members' gardens.

Trip to the Peterborough Garden Show

Some images from this summer's Mosaicanada 150 at Jacques Cartier Park in Gatineau, Quebec. The 32 huge floral structures were built with wire frames containing garden cloth, some irrigation and over 3 million plants.

Paving the Walkways at Moira Gardens

The Tweed Horticultural Society and the town of Tweed shared costs to pave the gravel walkways at Moira Gardens. Now it's an easier, more comfortable stroll around the Gardens. Check out the site just across from Tim Hortons. Buy a coffee, stroll across the street and relax in our beautiful garden.

A great resource for planting in pots courtesy of Garden Making Magazine, Niagara on the Lake, ON. Click on the photo.